Why is RePack more sustainable than single-use cardboard boxes?

You noticed the "return to Tallinn" on the RePack package and you're questioning whether reusable packaging really is better than single-use if it has to travel across borders?

We understand it can be counter-intuitive, but we did the math. To make it clearer, we decided to break down the impact of reusable packaging in comparison to a common cardboard box in the following demonstration! 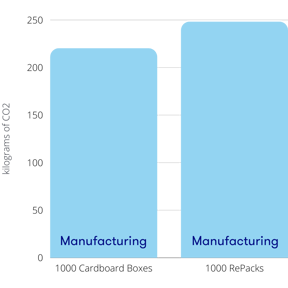 RePack is made from post-waste recycled polypropylene, recovered

from discarded appliances, a material chosen for its durability.

Because of its higher quality, RePack requires more material and energy to be produced, which makes it emit 12% more kilograms of CO2 than single-use cardboard boxes.

The impact of packaging weight during delivery 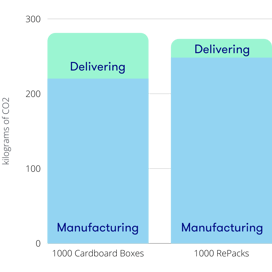 We assume both packagings have to travel on average 2000kms to be delivered, using a 3.5T truck.

On average, RePack weighs 124g whereas cardboard is 300g, and in transport, the lighter the better! This process emits 58% less CO2e.

We don't even take into account the fact that RePack adjusts to the size of the product and avoid shipping air, unlike with cardboard boxes!

After their first use, the 1000 cardboards need to be replaced by new ones, freshly produced. 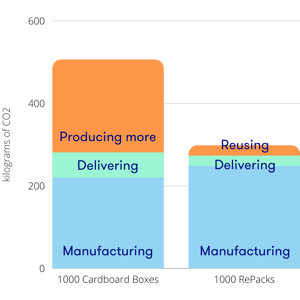 On the other hand, in order to be reused, the 1000 RePacks will need to travel back an average of 2000kms in a 3.5T truck to our return hubs in Estonia, France or Utah.

Even by travelling long distances, returning a RePack for reuse is 89% less impactful than producing new cardboard boxes!

We don't take into account the waste and recycling processes of cardboard boxes that also requires transportation and energy.

Reusable is better than single-use cardboard even after one cycle!

In this demonstration, it's clear that transportation is not the main cause of CO2 emissions.

The main difference is in reusing VS producing new packaging.

After one use only, RePack will emit less CO2e than a single-use cardboard box.

Knowing that a single RePack can be reused for at least 10 years, its impact on the environment will become better and better the more it is being reused!

Are you curious to know more?

So far, there's been a lack of in-depth, external case studies on reusable packaging to help brands, retailers, and consumers make informed choices. Our partner, Fashion For Good, released a highly insightful report for reusable packaging in e-commerce. I recommend that you read the 42 pages if you want to go in-depth.

Fashion For Good ran the first test to demonstrate where the impact occurs within the lifecycle of each system – known otherwise as to the impact hotspots. In doing so, the test clarified the absolute difference in emissions and eco-costs associated with each method.

The study shows that reuse models allow significant carbon emission reduction compared with single-use plastic and cardboard, even with the package travelling across long distances.

To understand the impact of RePack and reuse on a larger scale, we also worked with The Upright Project. Their goal is to quantify companies' net impact on people, the planet, society and knowledge.

An algorithm computing millions of scientific articles enables one to calculate the net impact of a company/product and compare it to another.

"All businesses use some environmental resources and create emissions through their lifecycle. RePack creates a small amount of waste and emissions. However, the environmental impact is significantly lower than for companies producing disposable packaging." The Upright Project

You can read the full report here as well.

Canadian customers are fed up with packaging trash. RePack is bringing reusable and returnable packaging on the Canadian market to fix this problem.

La Poste is releasing new pricing designed for reusable packaging returns. This enables to cut costs and to make reuse competitive with single-use in...

How the wrong packaging can hurt your brand, and how to avoid it?

Receive RePack insights and the latest features in your inbox - no spam!

Be the first to know about our latest shenanigans: case studies, stories and insights in the world of sustainable packaging.